Zoltan: Hound of Dracula (1977) Howls onto Blu Ray This Tuesday!

I love low rent '70's fare so when I heard Kino Classics was rolling out Zoltan: Hound of Hell aka Dracula's Dog I was excited as I had never seen it before. Well it certainly was...something. 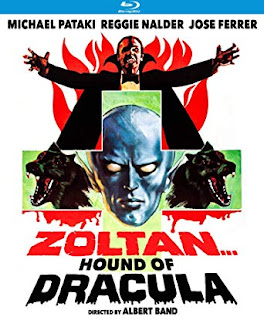 Leave it to the Russians to unearth Dracula's vault and with it his undead slave and of course his four legged friend Zoltan. Dracula is well and truly dead unable to revive even though his dog and faithful servant does (but its OK nothing in this movie really adds up). So, the pair must find a new Master and find that the last of the Dracula line just happens to be some avenge family man living in America. All howl breaks loose when the duo stalk the man and his family on a camping trip. By the late '70's Gothic horror was a rarity in America and was making a come back on the Euro scene. If the Dracula films weren't dead and buried by this point Zoltan might well and true be the final nail in the coffin. Consider this film was released the same year as masterworks like Suspria, Martin and Hausu (House) you really start to see just how low-rent Hound is. Its not that I feel im above cheap-thrill films, in fact I love them, however I found this movie kind of dull. Its not so much the poor acting, the large holes in logic or even its cheesy effects, but the biggest and unforgivable sin is being dull. It takes what could possibly be a fun premise and does very little with it in terms of an entertaining and memorable film. I even wish i could say its so bad its entertaining but its not. I think if you grew up watching this movie you could forgive a lot for nostalgia sake but as I am new to this film I did not have that kind of attachment to it. 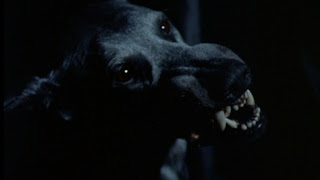 If you grew up with this film or time period or your a hardcore trash lover you might enjoy it more than I did. I will say the very end shot was priceless and I wish the rest of the film had captured that playful tongue in cheek vibe. I will say this film is notable for early effects work from Stan Winston, so its got that going for it. Highlights is Reggie Nalder who is always fun to watch.  If you are a fan or as I said cant help yourself with bad '70's outings your in luck as

Kino has rolled out the blood-red carpet for this release. The print itself is in 4k and looks amazing for a low budget film thats over forty-years old. You can really tell from night scenes that this transfer is top notch as everything is crisp and clear. The extras are a bit skimp but we do get a great commentary by Lee Gambin and John Harrison. They both deliver a fun and lively commentary which offers interesting context to the film. Rounding out the extra is the trailer and radio spot. Overall a A-plus release for a  cheesy dog of a film.