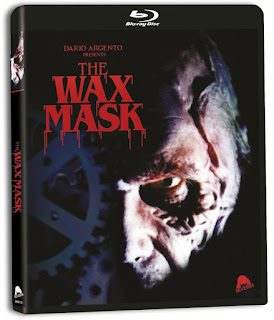 The Wax Mask was, to me a legendary film, as it nearly teamed Italian horror titans Lucio Fulci and Dario Argento. This never happened as sadly, Fulci died before filming could begin. Argento then handed the directing reigns over to first-time director Sergio Stivaletti who had worked on special effects on various Argento projects.  I have always wanted to see this movie, and while yes it has been released before on DVD I had not gotten around to seeing it. But thankfully Severin has treated fans to a brand-new HD restoration of the film and of its packed to the gills with extras. Sonia (Romina Mondello) is the sole survivor of a brutal murder of her mother and father. Twenty-years later she is still haunted by the memory of a hooded figure with a metal hand. While working for as a costume designer for a wax museum she starts to hear of similar murders to that of her parents. Now she must face her worst fear as the same madman is on the loose, killing men, women and children. 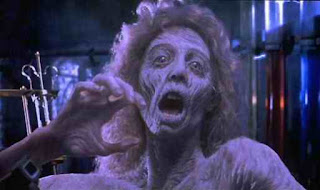 Wax Mask could have easily been a campy remake of House of Wax (1953) or A Bucket of Blood (1959) but the film weaves a wonderful Gothic poetic tone that is wholly refreshing. However, the film is a bit of a mixed bag.  The film’s macabre visuals coupled with the great real locations, helps ‘mask’ the films lower budget. You can tell a lot of details went into the films costumes, set pieces and some great camera work by cinematography by Sergio Salvati (The Beyond, Zombie, Puppetmaster) who has over fifty films to his credit. It also goes full in on taking the premise seriously and for the most part they succeed in bringing an interesting new spin on the ‘Bodies made of wax’ horror sub-genre. Now for the bad, the film feels like it prods along at times with a romance sub plot that honestly feels like it only slows down the film. Also some characters are not fleshed out nearly enough. While the practical efforts are good (considering that’s what Stivaletti started out doing) the digital efforts have aged really poorly. It feels like a cheesy Full Moon film circa the late ‘90’s. I wont spoil it but the ending is pretty laughable, which ruins the atmosphere and gothic tone the film works really hard to build. Overall if you grew up on Full Moon films of the ‘90’s you might find yourself ‘waxing’ nostalgic when watching this movie, which might help gloss over its sometimes-obvious flaws. For others, it might be hard to get over the films plot holes, dated effects and shoe horned romance. I will say, for better or worse it commits to its bonkers premise and I have to give the filmmakers credit for going all in. Not a bad little ‘wax’ based horror film.

The amount of extra’s Severin and its team produced for this disc is staggering. Extras include: Audio Commentary by Director/Special efforts artist Sergio Stivaletti and Michelangelo Stivaletti. Beyond Fulci a twenty-minute retrospective of the planned Argento/Fulci project and how it evolved into the film we know today. Its really interesting, especially to hear Dario talk about Lucio. The disc includes a whooping six more Interview featurettes including: The Chamber of Horror’s Interviews with Producer Dario Argento, Director Sergio Stivaletti,Producer Giuseppe Columbo and Actress Gabirella Giorgelli, Claudio Fragasso and more. Rounding out the features is a vintage Behind the Scenes featurette with on set interviews with Dario Argento.  Everything you wanted to know about this film and much much more, is all provided in this amazing collection of bonus features. This is absolutely an incredible release for fans of Euro horror. Consider it a must own.