Halloween is quickly upon us and Kino Lorber Classics has some treats up their sleeves with Trilogy of Terror II, which is fun because the same label has released the first television film as well. 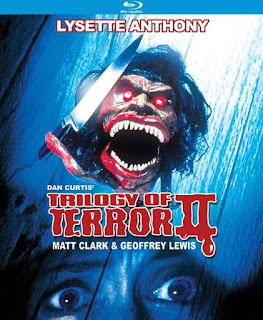 Dan Curtis might be best known for his landmark television series Dark Shadow's but he also responsible for two of my all time personal favorite films, Burnt Offerings (1976) and Trilogy of Terror (1975) (Both released by Kino Classics-and BOTH are amazing releases!) In 1996 he re-visited his popular made-for-tv movie by giving it a sequel. Like the first television movie, TOTII serves up three-short chilling stories with no wrap around.The Graveyard Rats sees a nasty rich man's wife and her lover scheming to kill him for his money. They succeed but in some plot contrivance they cannot collect unless the dig up his corpse to retrieve some microfilm. Graveyard Rats is a basic murder plot that felt like an episode of  the Tales from the Crypt Series in both tone and storytelling. Its so by-the-numbers its almost painful to watch. They inject some "twists" but honestly even I could see them coming from a mile down the cemetery trail. I do think the finale is just creepy and grisly enough to be satisfying. And you got to love the practical effects work. The second segment is called Bobby. Bobby is interesting as it recycles a segment from Dan Curtis's Dead of Night (1977). The story itself is from the legendary Richard Matheson entitled "Prey". Bobby tells the story of a Mother who uses black magic in order to bring back her Son who was drowned. While doing a spell one stormy night she is shocked to see that it works and Bobby is back. But of course he's not exactly the same boy she remembers. Bobby is a take on the old folk tale The Monkey's Paw and this re-telling is so over-the-top in its acting and the atmosphere is so incredibly extra it almost boards on parody.
That's not to suggest this is a bad thing, in fact I think its what helps make this segment the true stand out of the three stories. And dare I say is actually kind of chilling at times. Sadly, the finale is goofy and undercuts any scariness it might have conjured. The final segment co-written by the legendary William Nolan and Dan Curtis is the films homage to the infamous Zuni fetish doll segment from the original. I talked to Nolan and he mentioned he regretted not writing something as memorable in the original and that he wanted to do his own take on the killer doll. Titled He Who Kills the film takes place presumably right after the events of the first Zuni segment. The doll is found burnt in the oven and is taken away to be studied. Mayhem of course ensues. As much as I wanted to love this one, it has BIG murderie doll shoes to fill and despite being written by two amazing scribes it seems to fall flat. Honestly its missing that camp value coupled with Karen Black's insane and deliriously manic performance. Dont get me wrong, Lysette does a fine job and indeed does an excellent job in all three-segments however Black just had something special that cant be copied. 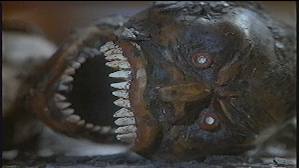 The original Trilogy of Terror (1975) is a fun but seems only remembered for the Zuni doll segment. But damn, what a segment that was. Trilogy of Terror II (1996) I dare say has more memorable segments but doesnt have that standout moment the original did. Bobby might be the closet thing it has to that but you cant compare it to how fans talk about the Zuni fetish segment in the original.
Its not perfect and its kind of basic at times but it does have Curtis's flare for moody set pieces and Neo-Gothic quality that makes even lesser works a hoot. Kino has really pulled out all the stops in its Blu-Ray for TOT II. The new HD master is clean, not overly bright and really makes the EC comic's like color scheme pop! The extras includes a fun and informative running commentary by author and film historian Troy Howarth (So Deadly, So Perverse series) who gives some great background and trivia behind the film. His informative context honestly made me like the film more. We are also treated with interviews with lead star Lysette Anthony and creature effects artist Rick Stratton and Second Unit director Eric Allard. Overall this is a treat for anyone who grew up watching this on television and while it doesn't hold up as well for me, it is still a great seasonal watch.

Consider this a must own Blu Ray. Kino has really outdone themselves.