The Prey Slashes its way to Arrow Blu-Ray!

With shows like AHS: 1984 we are all riding a wave of nostalgia for the 80's and all the oddball slasher/horror gems it gave us. Arrow Video is doing its part in re-releasing big titles like American Werewolf in London (1981) and obscure low budget slashers like The Prey (1983). 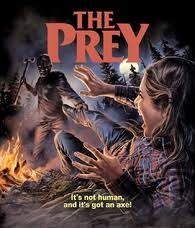 The Prey is a pretty early entry into the 'camping' slasher, especially when you consider it was filmed in 79 and released in 83 (three years after Friday the 13th) and tells of a group of campers being stalked by an unknown person after a horrible wildfire badly scarred him. I can kind of see why The Prey was a video era oddity that never really got talked about, unless by hardcore slasher buffs. Its missing that hook to truly help it stand out among its peers. With the glut of dice`em ups you really needed a gimmick to make you successful or at least noteworthy. For example both Friday the 13th and Sleepaway Camp subverted genre gender norms with its respective killers and something like Slumber Party Massacre had a male killer but also subverted final girl troupes. It was also one of the few slashers to be directed by a woman. With Prey, what you expect is pretty much what you get, a largely by the numbers killer in the woods. Its not, however without merits and you can tell director Edwin Brown tries to bring some flare and dread into the film by juxtaposing the cruelty of nature to that of the largely unseen killer, its a novel approach but still feels underwhelming.

The Prey also falls victim to a lot of filler material, which admittedly happens to even the best and more interesting made slashers of the decade. Sure, it does feature some alright kills (though nothing that truly stands out) and has enough vintage cheese and horror troupes to warrant a viewing. The movie is also note worthy for early effects work by John Carl Buechler who sadly passed away early this year. I wish I could say I liked this movie more but it felt like it lacked the fun of other '80's era slashers. Brown seems to undercut his own premise but not fulling exploring it which is a real shame as this might have been a lot better had some extra effort been taken with its story. Not a stand out but for hardcore slasher fans its not at all a bad way to spend an evening or lazy afternoon watching. 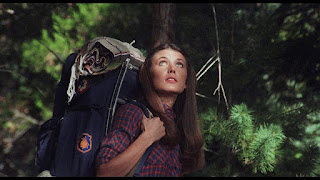 Much like Hills Have Eyes part II Arrow gives The Prey gives fans a better edition than it probably really deserves. But even though I wasnt a huge fan of this movie its still pretty great that we live in a day and age where, we as fans can not only get a 2K re-release but one that is packed to the brim with new features. Before I get to those I want to talk about the picture. The film is presented in a brand-new 2k restoration and its like night and day to the previous release. Night shots really benefit from this crisp clean new transfer. Includes a uncompressed Mono audio track. Now lets get to the bonus stuff. This thing is LOADED people. It includes 4 Brand New interviews with actors Debbie Thuteson, Lori Lethin, Carel Stuycken,Jackson Bostwick. Also In Search of The Prey: Ewan Cant and Debbie Thureson revisit the original filming locations. This and commentaries are my favorite kinds of extras. And speaking of, Arrow has not one but two brand new commentaries. Other goodies include a Cast Q&A at Texas Frightmare Weekend as well as a audience reaction track (also recorded at Texas Frightmare). Rounding out the features is an audio interview with director Edwin Scott Brown VHS trailer and TV spots and the original script (BR-ROM content).  The Limited Edition contains a 2k International Cut featuring the infamous 'flashback' sequence added without the directors approval. There is also a third 'Fan Cut' which is a cool composite of footage from both previous versions. Arrow did something similar with the Limited Edition of Blood Rage. This is always a really awesome thing the label does and it makes for a must for completest that want every version available. Its staggering the amount of time, effort and love that went into this release. The attention paid to it makes it a must for horror fans and those wanting to add yet another lost slasher classic re-release. I cant imagine another version being better.
Posted by The Video Attic at 11:51 AM