Playtime is over with Arrow's Toys are Not for Children (1972) 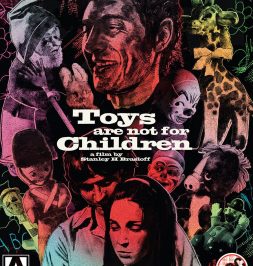 Charlie (Harlan Cary Poe) marries a young girl named Jamie (Marcia Forbes) but he soon discovers his new bride is emotionally stunted with a fixation on her toys and more disturbing her father. Turns out Jamie had less than an idealistic childhood with a sexually abusive father and protective but over bearing mother who kicked her out of the house. It doesn't take long for the marriage to fall apart and with it Jamie gets mixed up into some pretty sleazy things. Toys is certainly not for everybody and if the topics of incest is overly upsetting or triggering for you I advise you steer clear of this movie. However if you enjoy exploitation Grindhouse filth, you might just enjoy this movie. I say might because the film isnt as hardcore as some would like and this plays out mostly like a potboiler with some spice added for the pervert crowd. Im glad that the film isnt overly mean spirited but on the other hand if you, as a filmmaker are going to tackle this subject dont use kid gloves. If you are looking for something like early John Waters, which have a sense of outrageous even absurd quality, that is sadly missing here.

This is where I think the film fails. Its more drama and not much steamy craziness. Its not to suggest this movie doesnt have sex and nudity, but its just kinda meh to be honest. Maybe i've become too jaded but outside of the incest subject which is very unnerving the rest of the film feels like it plays everything safe. Had it amped up the Waters like absurdity and insanity I think it would have made this a much more enjoyable film. What we get is a melodrama that yes is upsetting at times but ultimately doesn't deliver an entertaining film. Something like Sinful Dwarf walks that line of bonkers and sleazy this does not.  As a stated above what I love about Arrow is they can release a mainstream horror title but also produce grimy underground films with the best of them. This film was previously released on DVD by Something Weird Video and now has landed on Blu Ray for the first time in America. The print is of course great looking and it goes without saying a vast improvement from the previous DVD release. The extras are great and include a feature length audio commentary by Kat Ellinger and Heather Drain, a video essay by Stephen Thrower and a restored audio of the theme song which is a pretty interesting feature. Rounding out the extras is a trailer and has a booklet for the first pressing. I didnt love the movie yet I think others might and if you are a fan you should certainly pick this up.