Made for TV Cult Classic Dont Be Afraid of the Dark Warner Archives Blu Ray Review!

When I think Dont be Afraid of the Dark I think of the flawed but fun 2010 film produced by one of my favorite working filmmakers Guillermo del Toro. And even though I like to think I am pretty knowledgeable about new and old movies this one escaped me. So you can see why I was excited when I learned Warner Archives would be releasing it in time for Halloween! 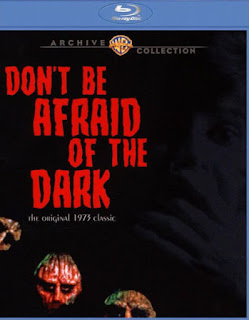 Director John Newland is no stranger to television, working on classics like Star Trek and One Step Beyond. Here he takes a stab at a made for tv horror movie which has gained a loyal following over the years and even had a big budget remake. I feel that made-for-television movies have a reputation within the horror community for not always being the best-however Dont be Afraid of the Dark is the exception to the rule. A young couple movie into a run down mansion with the hopes of fixing it up. Within the walls is a dark secret- demons that inhabit the home. Sally (Kim Darby) unwillingly lets them loose with, as you might guess- terrible results. The film takes its time in building characters and more importantly a sense of dread and we only get slow drips of horror. This is where I think the film thrives but also is weakened by- On the one hand I like the tension building and how the characters are given a chance to be fleshed out. However, as much as I enjoy a slow burn I feel that the film does tend to drag in spots and I couldn't help but check to see how long I had to the end. Speaking of, with a run time that is just under eighty minutes there certainly were scenes that felt like they could have been either trimmed or lost altogether.  This I feel is where the remake works better as it streamlines the narrative without sacrificing character and plot development. I also liked how a child was the gate way into this world rather than a neurotic housewife. Lets talk about the main draw- the tiny demons that are the center piece of the film. The creatures are honestly not that scary, but I can see how they would be to a early '70's audience especially to younger viewers. The FX designs themselves are actually well done considering the time they were made and the budget. What helps is a lot of the scenes the little goblins are seen in shadow or half lit, giving it a more eerie presents. And that is a good segway into another thing that works about this film, its neon Argento-ish lighting style. The lighting is dripping with green and red hues giving it a over the top comic book feeling. Visually I wasn't expecting this from a made for television movie. This attention to style helps smooth over some more cheesy aspects of the creatures.

Overall even though I didn't see this as a kid I feel enjoyed its creepy less-is-more quality amp'd up with a great visual flare. I didn't love this movie as I thought it was a bit dull and dated and its a case where I liked the updated version better-however-I still enjoyed it as it was cheesy, spooky fun and had a visual flare I was not expecting. If you`ve seen this years ago or like me for the first time I think its a fun little movie 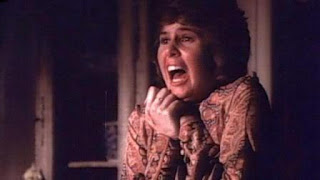 Warner Archives really delivers this their new re-release. It looks incredible especially for a made for tv movie made over four decades ago. Using a brilliant looking new 4k scan the image is wonderfully vivid and the colors really pop. You really get the benefit of this new scan when you consider a lot of the film plays with darkness and shadows to build its tension. As I mentioned in my review the film has an interesting visual platelet and the new restoration truly highlights this. The audio is from a nice 2.0 track and sounds are crisp and clear. If you are a fan of this movie and want more information about it you are in luck as WA priovides not one but two feature length audio commentaries, one by Amanda Reyes (author of Made for TV Mayhem) and another by Jeffery Reddick (screenwriter of  Final Destination) and Sean Abley of Fangoria. Pity there wasnt a tv trailer for this release to round out the features. For fans new and old this is a must have release!