In 1975 Jaws was unleashed into theaters and even decades after the screams died down people were still cashing in with various 'nature run amok' films. As of 2019 we are still getting Jaws-inspired movies with no signs of this slowing down. But if you are like me, this is a good thing. Killer Crocodile (1989) is a late entry into this sub genre and has been, along with its sequel been released by Severin Films and is out now! 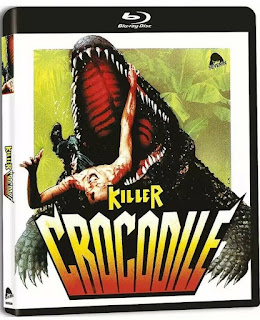 A gang of Eco-warriors arrive at a tropical delta and discover to their dismay toxic waste has polluted the water. But that will be the least of their problems when a killer crocodile decides to put them on the menu. Things only get worse when the corruption of the local government allows this carnage to go unchecked. Killer Crocodile serves up pretty much what you might expect from this type of outing, you have pretty standard borderline stereotypical characters,  plot holes and cheese the kind only the Italians can dish out and of course the films center piece a mindless man eating killing machine. Fans of these kinds of movies will relish in the films laughable dialogue and over-the-top acting. As much as I enjoyed the usual troupes of z-grade rip-off import films Killer Croc is honestly kind of dull in places. In a better movie a break in the action isnt a bad thing in fact it can often times help build and flesh out characters and give the audience a rest in between action scenes. This film however suffers from  a lull in crock attacks and also injects a crime/cover up subplot that doesn't really have a satisfying pay off. I also wish it would have played to its B-movie charms and had some fun with the genre. A tongue jammed firmly in the cheek would have helped gloss over some of the more wanting aspects of the film. 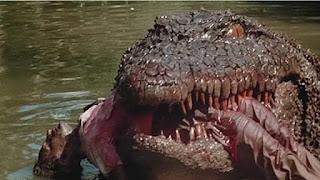 What saves the film and makes it watchable is the incredible practical effects. The crocodile itself is great looking and the gore and splatter effects will sure to be please any gore hound worth his salt. That guts-a-flying finale is oh so satisfying to watch. Riz Ortolani provides a heavily inspired Wiliams Jaw inspired theme which is pretty well done. Overall I think in order to love this film you have to really like these types of films. If not I think you may not have a great time. I find myself in the former category and I enjoyed it despite some slower moments. Even though it does take itself way too seriously it is still a good watch especially if you get a group of friends over. Killer Crocodile looks great sporting a new 2k scan from the films original negatives. You can really tell in night scenes just how improved this new transfer is. Colors look natural and thankfully are not blown out like some "new scans". As always Severin does not disappoint and unearths some great interviews including: In the Jaws of the Crocodile: Interview with Makeup FX Artist Giannetto De Rossi, The Fearless Crocodile Hunter: Interview with Actor Pietro Genuardi Of Crocodiles and Men: Interview with Richard Anthony Crenna and It Crawls: Interview with Cinematographer Del Zoppo. Rounding out the features is an original trailer. Severin puts a lot of love and care into each release and its great to see another trashy, Jaws rip-off get this kind of attention. Worth owning.