Beware the French countryside in And Soon the Darkness (1970) Kino Blu Ray Review! 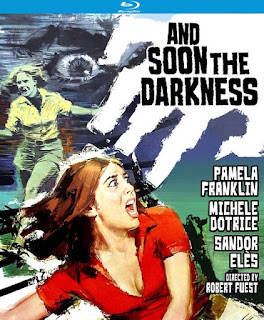 And Soon the Darkness (1970) is a film I wanted to see purely based on the fact it was directed by Robert Fuest who made, and I said this without ANY sense of smug irony, a near perfect film in The Abominable Dr. Phibes (1971). But is it as good? The film opens with two British tourist bicycling through the remote French countryside. Cathy (Michele Dotrice) the more free-spirited girl decides to laze around in the country despite her friend Jane (Pamela Franklin) wanting to keep going. They have a fight and Jane leaves her friend in hopes she will catch up later. Now all alone Cathy slowly realizes she is being watched and later ends up missing. What started as an fun holiday starts to turn into a nightmare as Jane desperately searches for friend. 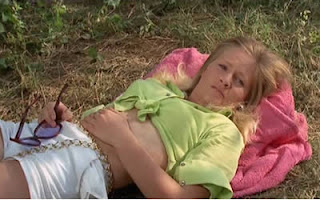 Right from the first frame Franklin and Dotrice are photographed in a beauty yet very rural countryside and its  here where Robert really sets up a sense of total isolation which brings on a palpable feeling of dread and tension. We the audience knows something bad is about to happen but we dont know when and how? Fuest uses this viewer expectation masterfully, toying with his audience in a very Hitchcockian way. As the film progresses we are introduced to weirder and weirder characters and every bodies motives are always questionable at best. I will be blunt and say this movie is not for those who have a short attention span. Fuest crafts a slow burn of a film and doesn't mind taking his sweet time building tension while also unraveling a mystery. For those that are easily bored, this movie will probably not be very satisfying for you. I found it abit slow but also I was so caught up in the films mystery that I didnt ever feel bored. The film has a level of psycho-sexuality and a razor sharp sense of style that makes this a hallmark of the thriller genre. It also pre-dates a lot of 'tourists aboard' horror sub-genre. I wont spoil the finale but just say it makes the slow burn worth it. Kino Classics has rolled out a brand new Blu-Ray and as with Nightmare Beach has provided fans with a 4k re-master which tops the previous releases. Colors are vivid and the new transfer really takes advantage of the lush countryside cinematography by Ian Wilson (The Crying Game). The sound is great as well. The extra's as always are on point and I was delighted that they were able to port over the vintage commentary for the 2002 Anchor Bay Entertainment release which features Robert Fuest and Co-writer Brian Clemens as well as a brand new commentary by Author (So Deadly, So Perverse)  and film historian Troy Howarth.
As always Troy is well researched and makes for a fun guide into the sleaze. Rounding out the features is a trailer and vintage radio spots.