An American Werewolf in London (1981) Howling's Again with Arrow's Re-Release. 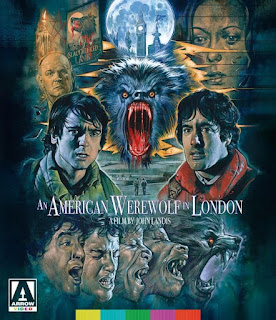 1981 was a stand out year for horror with The Evil Dead and Scanners and a slew of movies still riding the slasher wave. We got two great and very different werewolf movies that year, The Howling by Joe Dante and of course Landis's horror comedy An American Werewolf in London. Two Americans named Jack (Griffith Dune) and David (David Naughton) are backpacking in London when they are savagely attacked by what they think is a madman. Jack is badly injured but his friend David dies. A nurse named Alex (Jenny Agutter) takes the young man and a love starts to bloom. But since this isnt a rom com things start to get messy when David starts turning into a vicious four legged killing machine. Landis wastes no time in setting up the films characters, snappy dialogue and a moody tone right out of the gate. Its impossible to pin point just one reason why this is an amazing film. Everything just works so damned well. I mean, you have Rick Baker at his Oscar winning best giving us one of the greatest werewolves in screen history, not to mention the utterly painful and spine chilling transformation. John Landis's script is tight and filled with a wickedly wonderful sense of dark humor. This coupled great direction, wonderful cinematography and an array of brilliant performances by Naughton, Agutter Dune helps elevate this movie well beyond B-movie fodder. 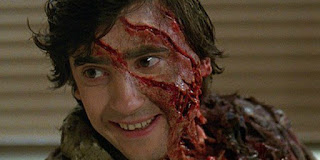 Werewolf in London is a classic for a reason, it just works on every single level and its why it remains a standout film over three decades later.

Arrow Video has a real treat in story for us this Halloween season with a brand-new Blu-Ray release. The film itself is presented in a brand new 4k transfer which is pretty incredible looking, especially on a 4k television, We are also treated to a hair-raising  5.1 DTS-HD Master Audio. If you love extra's I cant stress how great this release is. Not only does it port over everything full the previous Full-Moon Edition but includes new material including a new commentary with Paul Davis, Brand-new interviews and video essays like I Think Hes a Jew: about how Landis film explores the films Jewish Identity. Other highlights include a look at some real props and costumes from the film. In totally you got over three-hours of bonus material which is staggering for any fan of this film. Overall this makes my list for one of the best releases of 2019 and something that every fan should own regardless if you own this on Blu-Ray already. If you dont now is the perfect time to upgrade.