Go to Hell with Arrow's Hellraiser and Hellbound: Hellraiser II on Blu-Ray 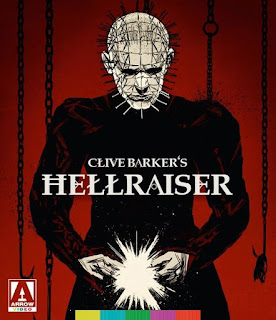 To simply say the first two Hellraiser movies had a huge impact on me early in my horror education is a severe understatement. They, along with The Evil Dead 1 and 2 were the highlights to a bloody-good Friday night movie rental session at my local mom and pop video store. Later on I bought my own VHS's and just about wore out those tapes. I remember how mind blowing it was to score the uncut Hellbound Hellraiser II with added scenes.  Later on I bought the DVD's and now the Blu-Rays and im sure sometime soon the 4k Blu Rays and so on.

While viewed today the films have aged alright, while the practical efforts are still very solid its clear there are obvious budget limitations and well, to me it only adds to the films charms. Both films were truly ahead of their time in terms of its dark themes mixed with eroticism and exploring some deeply troubling themes of incest and extreme s&m. I assume you guys at least know the plot of the first two films but I will go over them in a brief recap.  The first two films recall the story of the Cotton family and the twisted secrets that are unlocked when a mysterious puzzle book brings back Uncle Frank from the literal depths of hell. Kristy Cotton (Ashley Laurence) defeats Frank but loses her poor father in the process. The second film sees Kristy in a mental hospital, still reeling from the events of the first film. She is on a quest to save her Father from hell when she see's him in a shocking vision. Hellraiser II does something that is rare, which is makes a damn good sequel that, not only does justice to the first film but expands on its rich mythology. As for Hellraiser III: Hell on Earth,  well its alright. While the third film has developed its own cult following over the years it isn't that good. While I respect their is at least some attempt at keeping the same Gothic poetry of the first film (I mean that church scene is inspired!). However it feels like a film that had sparks of originality that was crushed by a studio wanting to produce a soulless cash grab on the latest boogeyman. We got one more decent sequel Hellraiser: Bloodline (Again a film destroyed by the powers that be) until we got a series of unrelated horror films with the name Hellraiser slapped on and strung together with a vague tie-in to the Hellraiser mythology. I wouldn't say I hate part three but when compared to the first two its a huge disappointment. 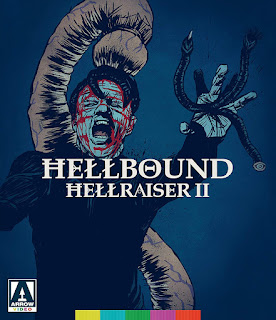 Hellraiser: The first Hellraiser includes two seriously entertaining commentaries including a rare standalone commentary Clive Baker (who no longer does audio interviews) and a second with Baker and actress Ashley Laurence. I believe this were ported over from a previous edition. It also includes in depth interviews with actors Doug Bradly and Sean Chapman. The highlight is the feature length documentary Leviathan: The Story of Hellraiser pt 1. Rounding out the bonus material is a vintage featurette on the making of the film as well as trailers image galley and a feature called Soundtrack Hell about the original planned soundtrack for the film.

Hellbound Hellraiser II: Much like the first film, this film has two commentaries this time with director Tony Randal, writer Peter Atkins and actress Ashley Laurence and a second one with Randle and Atkins. The second part of the Levitation doc is includes as well as more interviews , trailers etc.

Arrow Video released what they call the Scarlet Box which included the original Hellraiser trilogy (1987-1992) in 2017. The boxset was a limited edition and is currently going for nearly two-hundred dollars. Recently Thankfully Arrow has re-released single editions of part's one and two on Blu-Ray. Both films port over the extra's for each movie, minus the booklet and various bonus like cards and fold out posters. If, like me you cant afford the boxset on a secondary market at the moment, these single releases are a nice affordable option. It would be cool if they also did Hellraiser III as a standalone release, even if for completest sake. The picture, sound and bonus features are great and if you've never owned these before or own a bare bones release you could consider upgrading.
Posted by The Video Attic at 11:56 AM