Today in the attic I decided to dive incredibly far into the toxic barrel and fish out She Freak (1967). 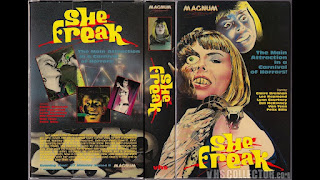 I  struggle to explain why I have such a soft spot for this film. Maybe its the ultra 60's cheese or that its not so subtly rips off the plot from MGM's Pre-Code masterpiece Freaks (1932) directed by Tod Browning (best known for 1931's Dracula), maybe its the fact it was an early Something Weird Video title  (in the Freak Show Box set). But whatever it is, I for better or worse like it a lot. In fact I enjoyed this trashsterpeice so much that I wrote about it in my first book The Ultimate Guide to Strange Cinema (Schiffer Publishing)  The plot such as it is, follows Jade (Claire Brennen) a stuck up waitress that decides shes going to make it big by running away and joining a traveling circus. Choices. Once she joins, she does her best to sleep her way to the top, while also spitting on everyone else. Of course the performers dont take kindly to the dehumanizing treatment and exercise their revenge in a finale sadly spoiled by all the films promotional material. 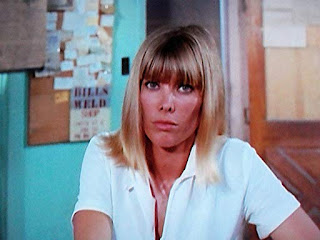 Prior to writing this review I watched this movie with the audio commentary for the Something Weird Video Release (which I highly recommend seeking out) and i'm glad I did, as it cleared one the biggest complaint I had with this film, namely its padding. Serving as the films writer the legendary exploitation king David Friedman talks about his passion for the carnival and all the prep footage (putting up, tearing down) came from his love for that world and not merely padding as I assumed.

Maybe the reason why I love this film is, it really is an earnest love letter to carnival and carnival workers. He freely admits in the commentary that his love for Freaks made him want to write a kind of remake of it. While its not the dark pre-Code film Browning made She Freak does have loads of charm and some pretty entertaining scenes-but honestly if you are not into carnivals you may find it dull in places. I can say I have seen this one no less than five times and even with its short comings it has a lot of enjoyable low brow melodramatic moments, freaks (well people made up as freaks) and chocked full of cheesy dialogue and sleaze. Sadly gore hounds looking something ala Blood Feast will be disappointed as this film is pretty tame even by the late 60s. There is one semi-gore scene involving a knife fight but thats it. Honestly this could be easily a PG movie there been a rating system in place.

She Freak is a wild, weird and color filled glimpse into the 60s carnival scene, which is in a way a document of a certain time and place. Its hard to say if you will enjoy this or not- the mileage for crap films varies from person to person but if you like 60s camp, carnival culture and odd ball films I think this one might be required lazy Sunday with a hangover viewing.
https://www.somethingweird.com/product_info.php?products_id=19083