Cruising for a bruising with Arrows new Cruising (1980) Blu Ray

Welcome back to the attic. Today we are looking at Arrow's Blu-Ray of Cruising (1980). Available to buy Aug 20th 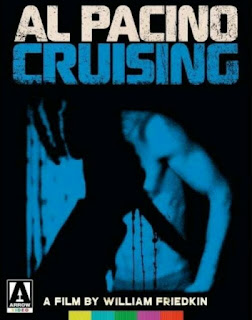 In the '70's William Friedkin was at the height of his creative powers, and seemingly a hit factory making machine, churning out films like Boys in the Band (1970), The Exorcist (1973) and The French Connection (1971) -all stone cold classics. He proved with Cruising that he still had it in this new decade. Steve Burns (Al Pacino) is New York cop hot on the trail of a murderer, picking off gay men from various s&m and leather bars. Now Burns must don his best leather clad outfit and go deep undercover to find this killer before more people die.

Before I dive into the review I feel like I should say a few things: Needless to say the subject matter is pretty controversial and at the time protests were held from the LGTBQ community in what they deemed as unflattering stereotypical portrayals. Even now, despite being a cult classic it might rub some people the wrong way. Personally I as a gay man I dont see this movie as hateful or demeaning, but merely as a post- Halloween slasher/thriller that just happens to act as a time capsule of a  pre-AIDS leather scene in New York. Friedkin has gone on the record to stated that this was not in any way meant as a bash to the community and I am inclined to believe him.So if things like this offend you, you might want to avoid this altogether.

It has been awhile since I seen Cruising and I figured now with the new Blu-Ray it was the perfect time to re-visit this film. The films opening murder is done in such a slow, almost fetishistic manner that helps set the tone for the rest of the film. I have to say even by today's standards its a pretty unnerving scene. Its always incredible to think this movie was made by a major studio, as the film is teeming with steamy man on man sex (merely suggested of course and laughably tame) and its sometime you probably wont ever see from a big studio again. Friedkin skillfully captures the gritty NY s&m scene in all its smoky, sweat drenched greasy essence. After giving this a re-watch I guess its easy to see how the film could be considered wildly exploitative, focusing on the more preserve aspects of late 70s early 80s gay scene. But for me I see it more as interesting time capsule of a bygone era wrapped in a Giallo whodunit (on a much bigger budget). The mystery is engaging and the ending left me thinking days after the credits rolled. The recent film Knife+Heart lovingly pays homages to Cruising and its not hard to see why this film has left such a lasting legacy. I honestly think Warner Bros is ashamed of this film, but luckily we live in a free society where we can view this any time we want. And now in stunning 4k thanks to Arrow Video.

Picture/Sound: Cruising looks incredible sporting a brand new 4k transfer, giving the film a much needed upgrade from the previous release. The transfer was approved by Friedkin himself and a lot of the night scenes are greatly improved with the new scan. Sound wise we have a nearly flawless 5.1 track.

The Extras: Sadly Warners for whatever reason has not allowed Arrow to produce new extra's. I guess we should just be happy they dont try and bury the film like The Devils. This means previous material has been ported over to the Blu-Ray, but not having owned this previously I was happy with the extras which are a directors commentary and a featurette on the making of. Its really a shame that Arrow was barred on new features as I am sure they would have produced some great content. Still as a mentioned above lets just be happy we have a nice 4k pristine film with a few bonus stuff. Its noting amazing but I cant fault the label for this. With a great picture and sound this film is worth upgrading even if you have a previous release.

Whoever you feel about the films subject, I still think its a worthwhile movie done by a director at the very height of his stride.